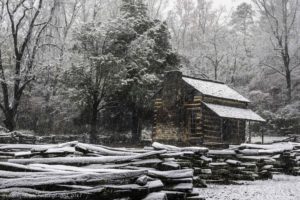 One of my favorite stops along my journey through the Great Smoky Mountains National Park was at Cades Cove. The Cove is a lush valley surrounded by the Smoky Mountains, and settled within its confines one finds many of the original old log cabins and barns from the early settlers. There are also churches and an old grist mill. 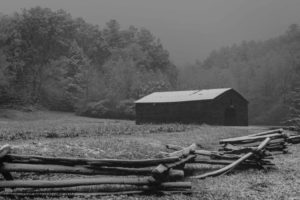 Navigating through the Cove was easy because of the 11 mile one way loop access road. I visited in late October and there was little traffic present, but in the spring, summer and fall months the visitor traffic increases. Thankfully, the park services has provided “pull offs” along the route for visitors to stop to enjoy the landscapes.

This section of the GSMNP (Great Smoky National Park) for me at least was redolent. Everywhere I looked I felt the echoes of the families that farmed this land before “eminent domain” removed them from the farms that generations before them had worked. There’s a stillness there, a solemnity that evokes respect for its history. Although I love the GSMNP, and all it offers visitors today, I am also conflicted by how history played out for the people that called the Cove home. 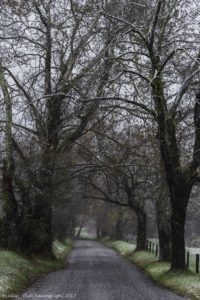 At the turn of the 20th Century life had changed from farming to more of a logging core. Large logging companies created the job industry for many residents. As is the nature of logging effects, the results was extensive deforestation. This resulted in the states of North Carolina and Tennessee purchasing land to create the National Park. Eventually as land was being bought up, Cades Cove was combined into the land purchases. One might expect that the preponderance of occupants refused to sell their land. In the end, the Tennessee General Assembly granted the Park Commission authority to seize the properties within the boundaries. A shining example of “eminent domain” at work within our National Parks. Like I stated earlier, having been aware of this history, I found Cades Cove to have a melancholy ambiance.

On the day of my visit in October, the valley was still and snowy. Although I didn’t personally witness the abundant wildlife, I know it was there, and what it meant to so many in history that depended upon it for survival.

I left Cades Cove in the Great Smoky Mountains National Park enriched as a Photographer because of the things it shared with me, but what’s more what it instilled in me! 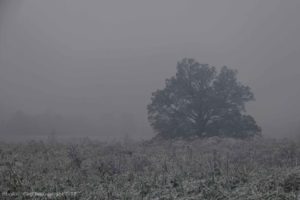