I crashed my drone, or UAS (Unmanned Aerial System) or UAV (Unmanned Aerial Vehicle). Whatever one cares to call it, I still crashed it, and my once nimble but now mangled Yuneec Typhoon Q500 4K drone had suffered the effects of gravity. The body was damaged, having fractured in two places on one rotor support wing, and there were 3 stress fractures lines that became evident upon closer inspection on the body. Three of the rotor blades were shattered into unspeakable fragments, yet oddly one was still perfect. I suppose it could have been worse considering the 40’ fall. There was also the “onboard 4K camera” and 3 axis gimbal that had smashed into 4 pieces, -I knew that that was going to be an expensive loss or repair. 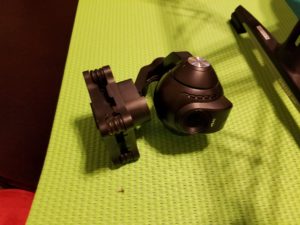 With all candor, I’ll say that I felt very defeated when it happened. I quickly snatched up all the scattered bits, and hastily retreated into anonymity. Crestfallen, I couldn’t understand what had gone wrong, and all I could focus on was the cost of the loss. Realizing I had the choice to either grow from this experience or remain literally “shot down”, I began researching through the internet and You Tube about the topic of “drone crashes”. There is certainly no shortage of materials to explore!

I’m so glad I made the decision “to grow” from this experience. My exploration of the internet revealed that there are many, many drone pilots that crash their UAV’s, even the top “pros”. There’s even an expression “if you ain’t crashin, you ain’t flyin”!  I found out that my encounter with wind and a tree is a common scenario. This boosted my self-confidence again, and I pushed further outside my boundaries by joining forums. Within one Yuneec forum group I discovered an entire thread dedicated to the repair of a CGO3 camera and gimbal system. Possessing a modicum of technical skills, I set about making the repairs myself. I carefully followed the instructions, and then hoping for the best, reconnected the repaired camera system to drone body. I powered up the control station, and then the drone itself, and waited expectantly for good results. Shazam! The control station displayed a video feed, and the camera was responding to the commands to move upward and downward. Once I determined that the camera was working again, (possibly the most expensive element to the UAV itself), I ordered a new drone body as a back-up plan. I had learned through my reading that one could “bind” a new drone body to the control station.

With renewed determination, I then progressed on to repairing of the drone body itself. I first confirmed that all four rotor motors were working correctly, and responding to the control center. Seeing positive results there, I then collected the shattered pieces that I had collected, grabbed a super-glue bottle, and set about gluing the body back together. I reinforced all the shattered joints after the gluing process with a combination of “FixIt Tape” and “Duct Tape”. I also counter weighted the opposite side, mirroring the tape applications so that the drone would not be out of balance. Then I waited…. 48 hours of waiting, “cooling my jets” so to speak, allowing the bonding elements to become firm and durable. Finally, I attached four new rotor blades, fired up both the control station and drone, and ever so delicately I lifted off. I am overjoyed to say that my drone is now airborne once again, and “flying the friendly skies”! 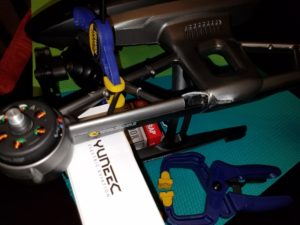 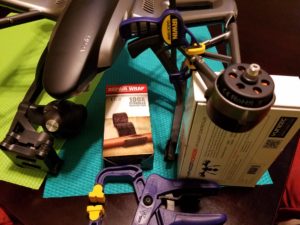 I’m grateful for my dad, a true renaissance man. He was a 30 year retiree from Grumman Aircraft Corporation. When I was a kid, he would occasionally take me to the Grumman Wyandanch Plant where F-14’s were manufactured. Dad taught me to be a capable individual, to be “good with my hands” and tools, and that with enough propulsion anything will fly!  Maybe that had something to do with my efforts and desire to make repairs,… but then again maybe not. Maybe it’s more that he instilled in me a sense of not accepting failure! Whatever the case you may encounter, don’t accept defeat. Don’t let a mistake define you. Instead grow from it, and then get back out there, “spread your wings and fly”!